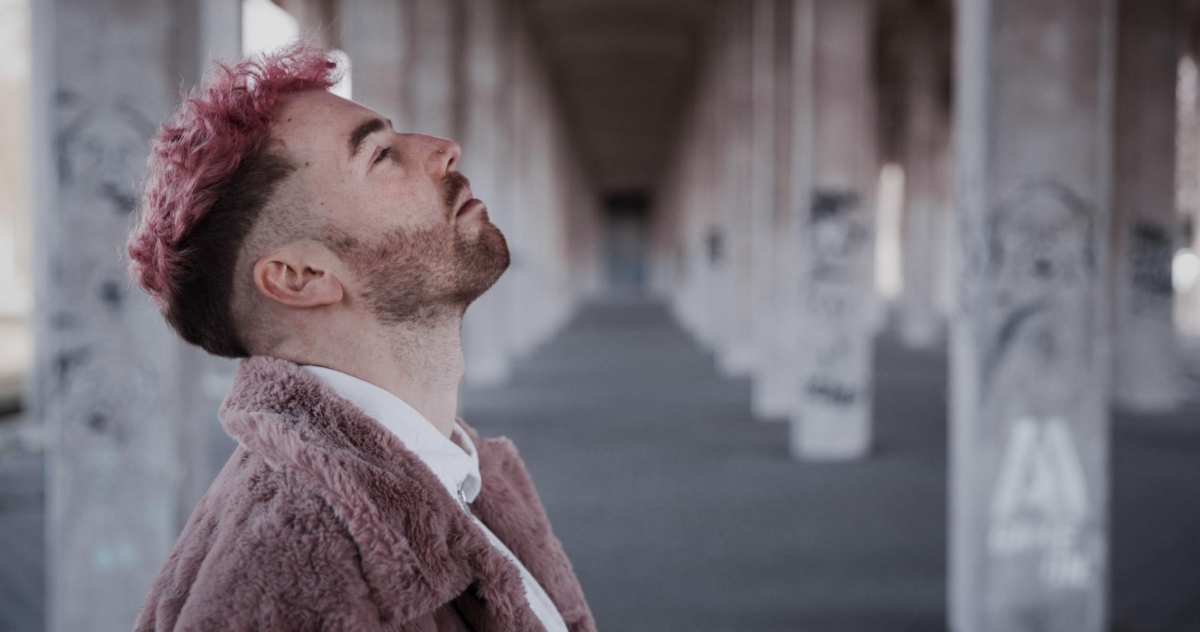 JÓRMA is the alter ego of musician and composer Jonathan Bonny. The Corona pandemic has been a springboard for the artist to reinvent himself by exploring an entirely new personality that radiates positive energy. I had the chance to meet JÓRMA from a distance and find out what was the motive behind creating music that is all about freedom during a period that has been more unfree than ever for most of us.

JÓRMA who is the embodiment of eclecticism was born during the Corona pandemic. The artist’s first single “Moonday” which is a queer coming-out anthem that reflects on what it means to be free, was released in May. The artist has big plans for the future: ‘My goal is to engage and connect with the audience around me. I see it more as a community, a mix between a gathering and theater where everyone can listen and say something.’

With their new song JÓRMA introduces themselves as a vulnerable, non-binary pop artist that knows less restrictions than Jonathan. But hold on, this is slightly puzzling, who is Jonathan and who is JÓRMA? Jonathan is JÓRMA and JÓRMA is Jonathan.

Jonathan used to solely identify as ‘he’, JÓRMA uses the pronoun ‘they’. The musician is trained as a classical percussionist and composer and JÓRMA is an aspiring pop-star. Where does Jonathan start and where does JÓRMA begin? Well, he’s not sure about this themselves.

Best of both worlds

‘Who JÓRMA is, is changing. In the beginning I thought it was a successful popstar, someone who is queer, conscious in terms of politics and vocal about it. But I realised very quickly that instead of trying to just be Beyoncé it’s better to ask yourself why you want to be Beyoncé. I’m still busy with the friction between who I am and who I want to be,’ they say. Their personality JÓRMA describes as ‘vulnerable, soft and searching’.

‘JÓRMA feels safer because it’s a role,’ they add. ‘I can try everything out as them. I like it when my personalities get mixed up as well.’ But JÓRMA and Jonathan are by no means two completely different characters. From what it seems to me, different layers of both personalities are intermingled. The artist wants to play with different elements that are borrowed from both his passions, theater and pop through his new character. ‘I want to take the best of both worlds from both, music and theater. I asked myself ‘ how we can have this pop impact and accessibility, with the same conceptual backbone and concept research we  consider the norm in theater,’ they say.

With the decision to adopt an alter ego came also some visual changes in Jonathan’s appearance. ‘We’re still exploring. I like using make-up and finally decided to dye my hair pink. I’ve been wanting pink hair for years and was scared what people were thinking. I felt as JÓRMA this physical transformation was easier.’

But using an alter ego to produce music was anything but planned. Actually it happened in the midst of the pandemic. ‘I work as a freelance music maker and wanted to make my own music as well. After a while we (me and my creative producer Agnese Fiocchi) chose this alter ego as a form to do it. It was a blank page, I can start from scratch, in terms of what it looks like, and what it sounds like,’ says JÓRMA. They feel ‘privileged’ about the past year because it offered the possibility to focus on themselves and figure out how to make all of their wildest imaginations a reality. And oh boy, does it get wild.

For the music video of their latest single “Moonday” – which is all about expressing freedom  – JÓRMA stood still in the cold sea for three hours without moving an inch. ‘I felt the need to embody this feeling of freedom and restriction of freedom. I ended up with the idea of standing in the sea, from high to low tide. It was almost freezing and very windy. But I found it very important to experience that. I’m not an actor, I don’t want to try to act that feeling of freedom,’ they say. But: ‘It took a few days to recover.’

To the artist whose identity is fluid, the experience of coming out as a queer person is the direct inspiration for this debut release. But their single “Moonday” is open for interpretation just like all of their tracks. ‘Someone else might read it as coming out of a toxic relationship, or something different altogether,’ they say. To JÓRMA the release of their first single was like the coming out of them as an independent artist. ‘I’m supposed to be in the orchestra, doing this felt like a coming out professionally. I felt people could judge it or not approve of it,’ they say. Yet, they took the leap, hoping to connect with a younger audience, people who usually don’t visit theaters.

But why write a song about freedom in the middle of a pandemic that has resulted in more restrictions than most of us have ever experienced? ‘To me this year has been very free,’ the artist explains. Because he had so many gigs to take care of, Jonathan felt close to a burn out, he says. ‘I didn’t even enjoy touring anymore at one point. It’s supposed to be awesome and it wasn’t. Corona made me think about what I really want to do,’ he says. Thus, JÓRMA was born.

Jonathan says he likes to be ‘part of someone else’s vision’, but because of this has never gotten the chance to do things his way. ‘I wanted a say in the visuals, the fashion around it, the ideology.’ In their music that is very conceptual and well thought-through the artist tries to combine real and fake, using plastic sounding synthesizers, a piano and their voice. ‘There is always this climax that’s out of place. I’m still searching for my sound,’ JÓRMA says.

I’m feeling a wave melancholy and hopefulness at the same time as we speak. Why are we so fucking scared to show our true colours? We should all become our own JÓRMA and dare to speak up for what we truly believe in. Sounds cheesy, I know. But what I’ve learned from our chat is that everyone can be freer, if we just take a leap.

Curious to check out JÓRMA? We have some great news!