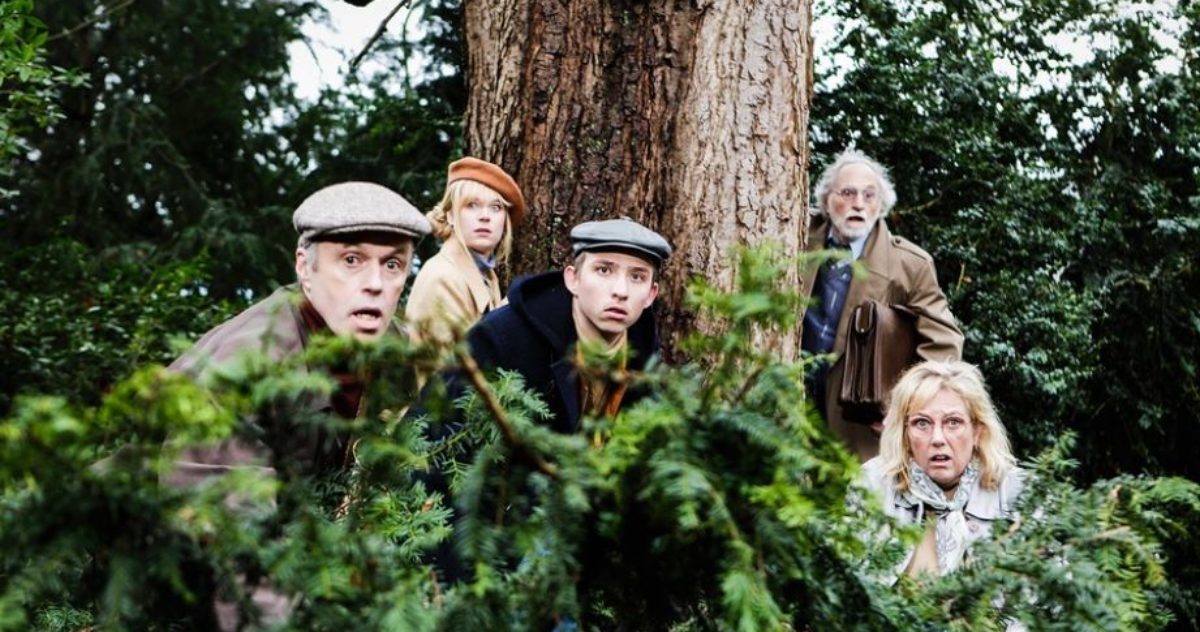 Stichting Speelgoud launched a new play called Verzet!! So we send our editor Sofia on a mission to check out her survival skills. Even though her Dutch is pretty good, Verzet! Left her a bit puzzled. Why? Let Sofia explain for herself.

Stichting Speelgoud is the organization behind the play Verzet!! or, as you would say in English, Resistance!!. I got invited to the premiere which felt like a secret mission à la Sherlock Holmes. In fact, it was so mysterious that by the end of it, I still couldn’t quite figure out what it was all about. But let me start from the beginning.

Upon arriving at a secret location, I hesitantly knocked on the door of a residence. A man with glasses and grey hair opened, asking me for the password that was needed to enter. I stepped inside a living room that was sparsely furnished. The only items that covered the bare walls were some abstract black and white paintings. From the beginning on there was this palpable tension and excitement in the air.

Once all ten of us were seated, an elderly man that somehow reminded me of my own grandpa, gave us some food for thought: He started to talk about how he had always wondered why fingernails continue to grow for one’s entire life when we cut them off anyway. ‘So, do we need the scissors for our nails, or do we have nails for the scissors?’ he asked everyone around. There was no answer to this question.

Now you might think that this question is super random, but this encounter sums up perfectly how arbitrary the entire play seemed. After throwing all these unanswered questions at us, the ten of us had to leave the living room we arrived at, to walk to the secret Verzet!! headquarters.

One of the comrades, as they call themselves, hurried ahead of us with quick steps to guide us to the venue without being seen by anyone. His trench coat, the brown fur hat and a worn brown leather briefcase made him look like an undercover spy. Upon arrival we met more people that signed up for the mission.

Once we entered the secret venue it felt like you had travelled back in time. After entering the inconspicuous door, I stood in a big lounge where waiters, wearing black ties and suspenders, were helping guests to be seated on the colorful seats and couches that were all over the place.

The venue was like a big, cozy living room except there was a bar too. Despite red lights and the huge chandelier that hung from the ceiling, the atmosphere was dim. Maybe it was because this sort of haze that was in the air.

So, what exactly happened during this mission I got to join?  In four parts, comrades Henk, Olga, Bertus, Niomi and Wesley complete four impossible and nonsensical missions to undermine ’them’.  It is being revealed that by ‘them’ they refer to a regime, although, who exactly is meant by this is still not clear to me.

My Dutch is good enough to get by, but I must admit that it was hard for me to understand some parts of the play. The thick accent some of the actors have, made it even more tricky to follow. To me there was no coherent story line apparent, the conversations between the characters seemed odd at times because they abruptly changed the topic.

One moment Wesley told Niomi about wanting to get her name tattooed on his back and the next second a group of male and female ballet dancers entered the living room. Throughout the play the props were moved around and interchanged rather than being static which I thought added to the element of surprise that was central to the performance.

I wasn’t really sure what to make out of certain bits of the play. Regarding the confusion on my part, one scene stood out in particular: At one point three of the comrades stood on tables across the room, barely speaking and just looking at each other.

Just when a wave of tiredness overcame me, which was probably because that red armchair I sat on was very comfortable, an alarm went off.  As I was startled by the loud noise, the comrades urged us to quickly leave the building. We were off to another hidden spot where the next chapter of the play would unfold.

What I enjoyed most about this play was the interactivity. Instead of sitting in a theater it was more like a city tour at night. After sneaking through an empty printing house, we were led to a basement which resembled a hospital. Being in these seemingly abandoned places created a certain tension, it really felt like we were on a secret mission.

This impression was enhanced through the comrades urging us to try not to be seen by anyone when walking to the next location. Joining Verzet!! is a unique experience for people of all ages. However, while there was a lot of yelling during the play the plot has still left me puzzled.

Do you feel triggered by this adventure? Check out the website of Speelgoud for Verzet!! tickets.