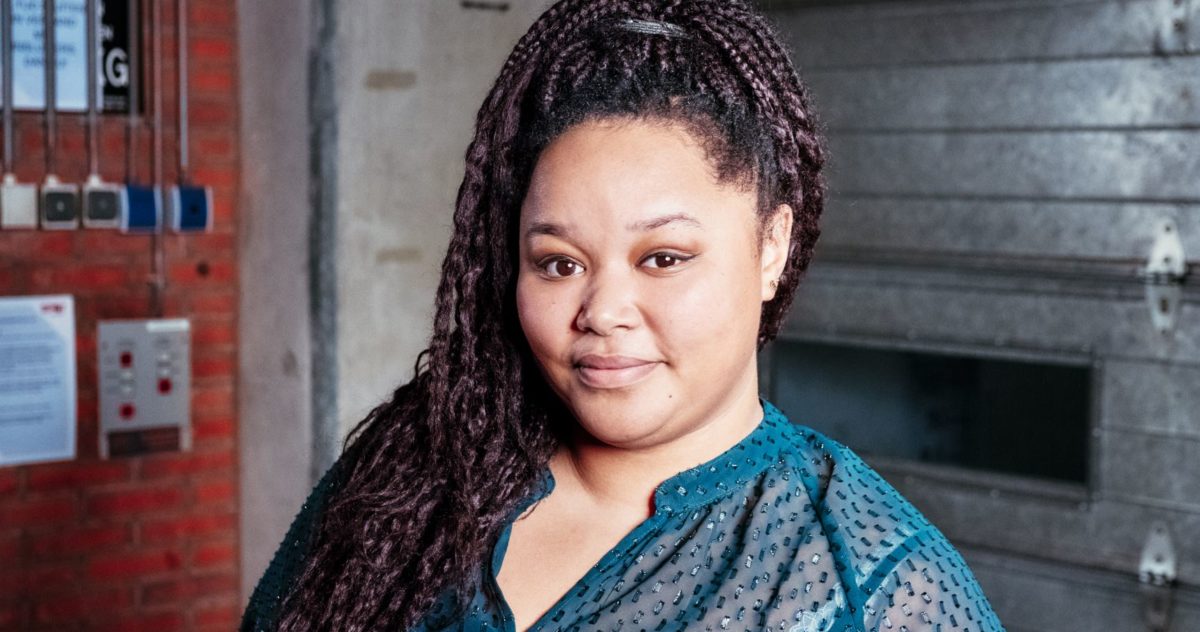 Befor/After is a big production by NITE: In total 37 actresses and actors from all over the world will be on stage. One of them is Dutchie Sarah Janneh, who had a wonderful chat with our editor Sofia right before the world changed.

Sarah Janneh would have stepped on the stage on the 14th of March for the premiere of Before/After at the Stadsschouwburg in Groningen, but Corona decided otherwise. Now on the 28th of April you are welcome to the live stream premiere. This is the video registration of the play by NITE – Noord Nederlands Toneel + Club Guy & Roni + Asko|Schönberg + Slagwerk Den Haag. It will be online until Thursday the 30th of April, so you’ll have all the time in the world.

Ever since she was a little kid, Sarah wanted to become a musical star. Going to concerts with her parents inspired her to pursue this dream. Eventually she took up acting classes for four years in Amsterdam, which paved the way for her career.

While we sip our coffee, she tells me how she couldn’t have done this without her mum: ‘My mum always paid for my acting and singing classes. I always said to her that I’m going to pay her back once I played at Carré, this huge theatre in Amsterdam.’  And so she does. During her internship she plays at Carré and finds the means to repay her debt.

‘It’s amazing everything came true’, she sighs, and a gratified smile appears on her lips. Throughout her career the actress has encountered a few challenges. Being an entrepreneur in such a turbulent field is not an easy task – there are lots of actors, and jobs are scarce. Reminiscing about her beginnings as a performer she tells me that meeting the right people and networking are crucial in order to get jobs after graduating.

‘You have to be extrovert and very much out there to make it’, she explains. I can tell that Sarah Janneh has a strong work ethic. She adds that to her personality, the key to success is to work hard and do your very best, then the rest will come from alone. The starlet’s attitude is very much down-to-earth. Sarah doesn’t like to pretend being someone she’s not for the sake of getting a role.

‘I’m just trying to be myself and try to be chilled about getting jobs. If you’re nice and kind, good things will happen to you. Good karma will always come back’, she smiles. Though, there are some things in the show business that can be rather frustrating, Sarah tells me. Superficiality is one of them. ‘When you audition it’s about the looks and it’s easy to take it personal when you don’t get a role’, she says.

‘You’re your own instrument so when you have an audition and they say ‘No’ it’s about your looks not fitting in their vision. It’s easy to take these things personally but you have to learn that it has nothing to do with you, as a person or your talents. You learn these things at school too, but yeah, it’s not always easy.’

Failing is part of the deal

Looking back on her career, Sarah tells me more about struggles she faced. ‘When I came from school, I just took any job without reading the script or knowing what my role was because I was worried about not getting a job.’ This resulted in some jobs where she had almost nothing to do or having to act in plays with a script she couldn’t identify with.

‘I guess when you just start out you can’t be that picky about which roles to accept. Though, what I learned from this is that you don’t have to take any job just because you feel this pressure to do so.’ Sarah thinks that failing is part of the deal. ‘Although these days I always read the script before accepting a role’, she laughs out loud.

The young actress has participated in quite some productions throughout her career. This experience makes it easy for her to switch back to Sarah after a day of practicing the lines of her character. Before our chat I didn’t know much about acting but she kindly shares some of her tips for getting into her role.

Sarah always works from the inside out, meaning that the first step is of course to read the script thoroughly many, many times. Next, she tries to connect the lines to her inner world, imagining how her character would talk and move around. Practicing a theater play is hard work, it’s a lot of trial and error, making it very time intensive to truly get into a role. ‘At the end of the tour you really love the role that you played and then you have to say goodbye’, she explains.

As we talk about the Before/After Sarah gets really excited. The all-round-talent doesn’t just play one role but plays the part of four different characters. One of them being a woman that is in her 30’s and in a committed relationship of 11 years who then cheats on her partner.

Additionally, Sarah also impersonates a police officer, a maintenance man, and a nun. The preparations for the play were extensive: In total it took Sarah and her colleagues ten weeks to practice.

‘On stage the play looks really nice, but in the back it’s chaos with all those people, props and clothing changes. But I love it, it’s so much fun!’ she grins. The first thing Sarah and her colleagues do after a successful premiere is to have a drink and party with the whole team. She explains that the preparations can be nerve wrecking and that after the show it feels like this huge weight being lifted from your shoulders.

Before/After portrays the daily activities of 37 ordinary people and how a small shift in their lives changes absolutely everything. It’s a unique approach because the plot deals with simple, everyday encounters. However, this is also what makes this play special. Everyone can relate to the drama that is shown on stage, making Before/After extremely relevant and touching.

Interested in Sarah Janneh’s roles in Before/After? Check out the website of the NNT for more info. Foto’s by Andreas Etter.