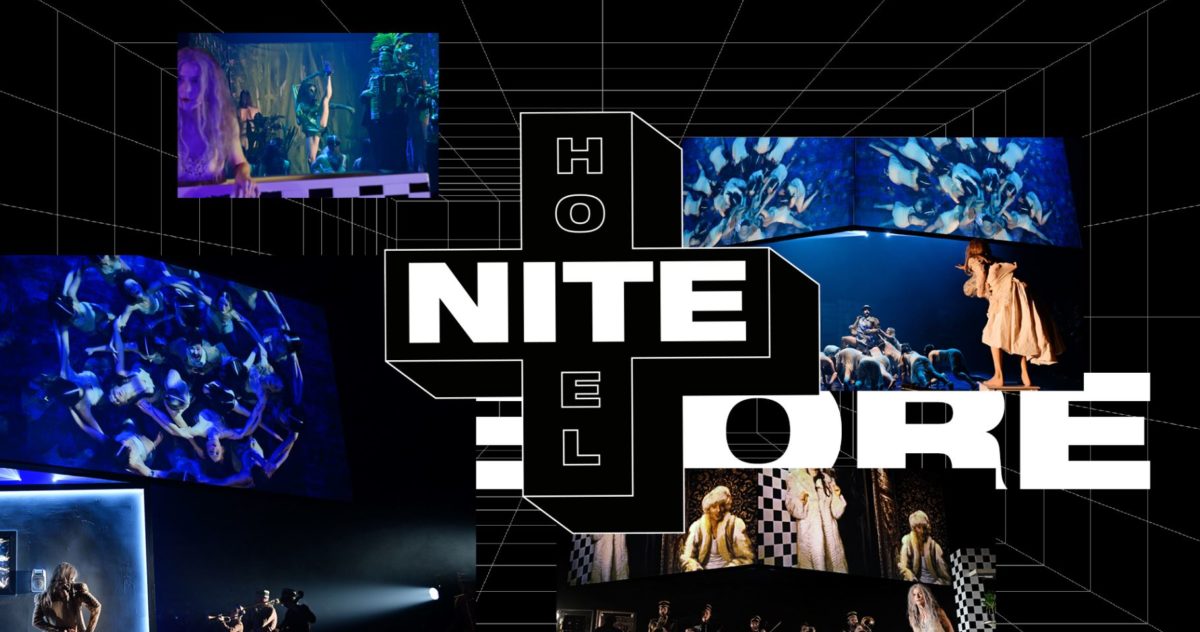 From under her cosy blankets editor Sofia and her roommate watched the digital premiere of NITE’s Before/After. A performance recorded before the world as we know it ended. In the period between 28th of April and the 1st of May people had the chance to check out the new work by NNT, Slagwerk Den Haag, Aski|Schönberg and Club Guy & Roni in the Digital Theatre.

With a glass of wine, I make myself comfortable in bed and open the link that gives me access to the online theater performance that starts in a few minutes. This is the first time ever I get to experience a digital play and I have no idea what to expect. I’m about to watch the world premiere of Before/After, NITE’s latest production.

NITE is a movement initiated by the Noord Nederlands Toneel, Club Guy & Roni, Asko|Schönberg and Slagwerk Den Haag. Together they create interdisciplinary shows. As all physical events got cancelled to keep Covid-19 from spreading, the celebration of the Before/ After debut sadly didn’t take place either.

However, this didn’t stop the producers from sharing their show with the world, as necessity is generally known as the mother of invention. They decided to host a free online event, using the video provider Zoom. In fact, NITE has created a whole new virtual theater experience, consisting of different components.

For a whole week the digital doors of their NITE hotel opened, offering custom made micro performances and small-scale art exhibitions to visitors. The main element was however on the broadcasting of the Before/ After world premiere.

At first, I was rather skeptical about the online version of their play. I was concerned that being at home instead of in a real theater, looking at my laptop screen, might diminish the overall experience. Are the performers going to manage to bring across their message, nonetheless? “It’s hard to capture movements with the camera, as you’re limited by the frame of the lens”, confirms Roni Haver co-owner of the dance company Club Guy & Roni.

However, I must say that I was blown away by the actors’ performance, which was recorded with nine cameras, a few hours before theaters closed. In all of their work Roni Haver and Guy Weizman focus on contemporary subjects with the goal to inspire, confront and move their audiences, something I think they also managed to pull off with their most recent production.

So, what is Before/After really about? The play takes you on a journey through the daily lives of ordinary people like you and me, telling a story of how a single event changes absolutely everything. What I thought was especially fascinating was that all of their stories were skillfully intertwined with each other.

For example, one of the characters, a lady in her 30s, cheated on her boyfriend after being in a committed relationship for eleven years. This story was then further elaborated by one of the other actors, narrating what’s going through the woman’s mind as she’s going back home to her boyfriend she had just deceived.

I thought this was cleverly done and to me personally this way of telling the story illustrated how all of our lives are connected with each other in some way. One of the things that impressed me most was that all performers played multiple roles. “The preparations for the show were extensive. In total it took us ten weeks to prepare”, Dutch actress Sarah Janneh told me during an interview we had before Corona, which feels like a lifetime ago.

While the play’s plot may be dealing with a simple matter, this is also what makes this performance special. The drama that is shown on stage is relatable to everyone, making Before/After a relevant and touching piece. The production’s relevance was especially reflected in one plot line, which dealt with an aggressive, poisonous disease that is invisible and takes over everything. Painfully relatable, isn’t it?

They referred to it as ‘the organism’, which was being fought by one of the characters called ‘the hunter’.  As with all of their plays, this NITE production also doesn’t have a real, linear plot, which made it tricky to follow at times, but it for sure adds to the idea that life is freaking random sometimes. “As per usual, this piece is not straightforward, we want to leave the thinking to our audience”, says director Guy Weizman.

I love how dynamic the play was, despite the fact that I didn’t get to see the actors perform in real life.  Different acts were shown parallel to each other, which really added to the depth of the story. While some actors were on the main stage, another scene was shown on a big monitor that hung above them.

I thought one of the highlights was the dancer’s performance, which was out of this world. At one point they were all laying on the floor, with a camera above them, capturing their extremely well-timed and controlled movements. It was a real trip and looked like a human mandala. However, unfortunately the quality of the recording didn’t do their performance justice.

All in all, the producers truly managed to pull off a layered, interactive event that made you forget for a second that you’re at home in bed and not in a theater. Using Zoom to broadcast the play instead of just uploading a video somewhere was a smart choice, because it added to that feeling of watching something together with other people, despite being in isolation – It created a ‘new togetherness’ as the producers call it. We could feel it from under the warm blankets.

Interested in visiting a digital theater show? Check out Tetris Mon Amour on May 16th, or go the website of NNT for more awesomeness.