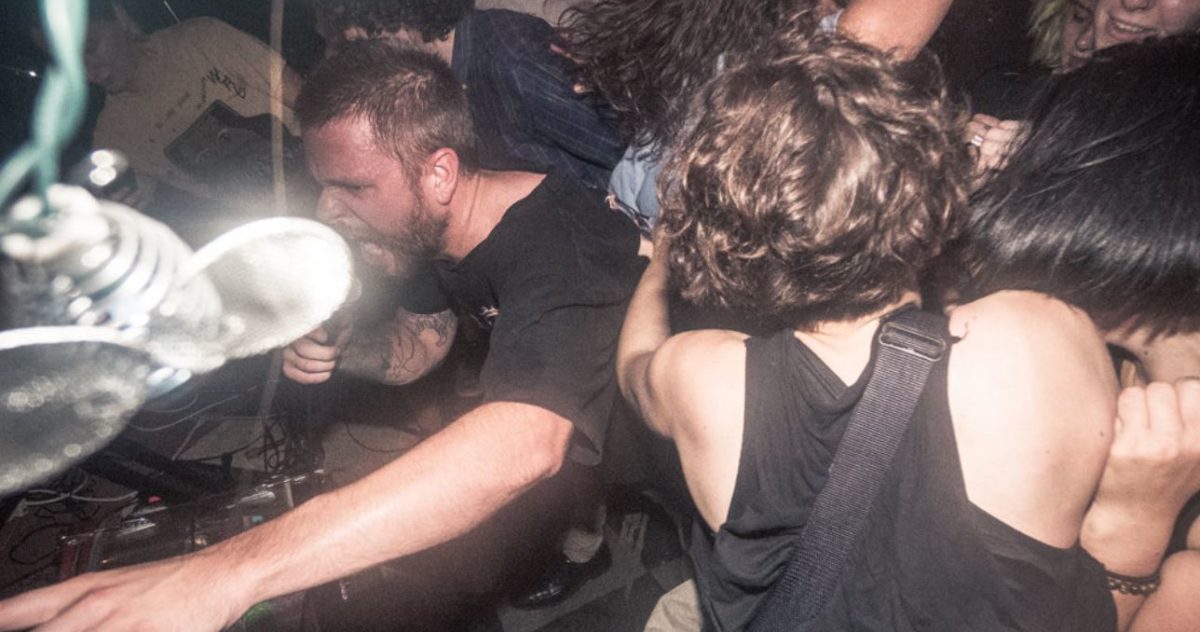 FridayNITE is a weekly stage for experimental art at Theater de Machinefabriek in Groningen. On the 29th of November American drummer, NAH was invited for this year’s closing performance. His music is an eclectic mix of confronting tunes that channel an exhilarating energy and make you feel perplexed at the same time.

The final session at FridayNite for 2019 ended with a bang: American artist Michul Kuun a.k.a. NAH blew the audience away with his pungent drum performance. I got the chance to enjoy a beer with NAH just before his show and chat about what it is like to be an American artist abroad, his biggest inspiration and of course his music that is anything but sober.

Beware of NAH and the Bass

‘I don’t want to create anything that’s too polished’ NAH tells me just before he goes on stage. ‘I would describe my music as urgent, thoughtful and thoughtless. I want to make it count.’ It’s dark in the windowless room, all you can see is a set of drums and a big screen. Random shots of car crashes light up on the screen, creating a very peculiar, somewhat bizarre vibe.

NAH sits behind his instruments, waving towards the audience, letting us know that he wants us to come closer. I stand right in front of him, maybe one meter away from his drum set. Single very minimal tones start to roar through the two huge speakers, eventually coming together and being converted into more and more complex, dynamic sounds.

Ultimately the bass kicks in and I can feel a rush of adrenaline. It’s loud. So loud that the the vibrations make my skin tingle. The music gradually becomes increasingly powerful and the temperature rises inside the dim room. At times the mix of tunes seems random, almost too densely packed, but somehow it still makes sense. Basically, NAH’s music is the stuff you want to listen to when you’re about to break all your exes’ stuff that’s still laying around in your apartment.

Suddenly the artist jumps into the crowd, creating somewhat of a one-man mosh pit. It feels like being at a weirdly aggressive living room party but by no means bad. In fact, standing in this dark room with random strangers and collectively being blown away by those harsh, piercing tunes makes me feel ecstatic.

Out of the ordinary

NAH has been playing the drums for about 19 years now.  ‘I played in bands for a long time’, he reminisces. ‘After a really long tour in 2011 I just had enough and sort of locked myself in the basement, starting to figure out how to make music for myself.  I just sort of got tired of the traditional band format and wanted to be responsible for myself. Not having to work with someone else’s schedule but rather be my own boss and take care of things myself.’

He explains that music has been part of his daily life ever since he could think. NAH adds that he has always been very receptive to it. Music is the medium he uses to communicate with people.

The artist deliberately doesn’t stick to genre rules. His raucous tracks are influenced by jazz, punk and hip-hop. Next to his drums he uses soundwave manipulation and vocals filtered through dense layers of distortion to create his distinct, experimental tunes.

The name NAH reflects Michul’s vision: It is American slang for ‘no’. The general idea of saying no is what drives Kuun. ‘Anti-movements and groups of people that dare to speak up for themselves, claiming their purpose is what inspires me.’ Although he admits that the difficulty of coming up with a band name that is not utterly cheesy is part of the reason why he chose his alias.

Life as a musician overseas

Being an American artist in Europe, it hasn’t always been easy for NAH to pursue his vision. Language barriers and not knowing anybody were issues he struggled with when he first moved to Belgium. A major difference the musician finds himself dealing with is the European work mentality: ‘In order to do something you have to explain yourself and the purpose of what you’re doing rather than just doing something because you want to.’

This took some getting used to for the eccentric. ‘I don’t want to be a hater’ he says. ‘But a thing that I generally dislike about the music industry are rules and schedules. I don’t like the format behind presenting music, getting the right interview or premiere. I find it all a bit boring. I like to be a bit more impulsive than the industry would allow. But at the same time, it’s sort of a necessary evil to have your stuff be heard.’

And yes, you definitely want to hear this guy play. Back in the dim room NAH performs the shit out of those drums. People in the crowd get infected with this raw energy and suddenly more of us dare to join the small circle around the artist, getting sucked into the weirdness. With his eyes closed, hunched over his instruments bobbing his head, he hammers on the floor tom as if there’s no tomorrow. It seems like he doesn’t even have to pay attention to what he’s doing, it just flows naturally.

During the entirety of NAH’s performance I feel like being in some sort of tunnel, not being able to think about anything else but just getting swept away by the music. I’m not sure whether it’s because of the beers or the music but I leave the venue feeling like I could take on the world.